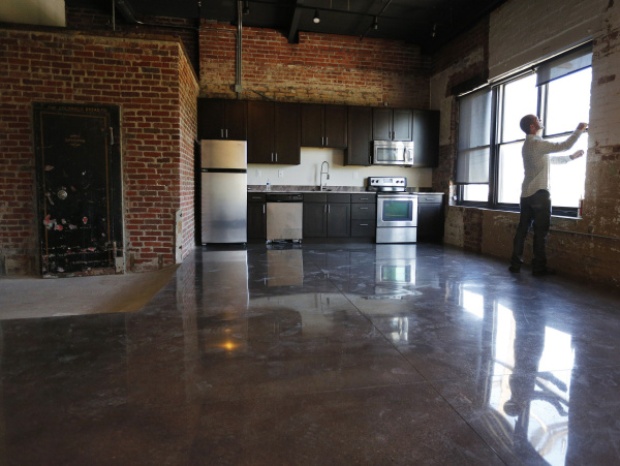 As symbols of rebirth go, it’s hard to top this one. Late today, Kevin Lykens plans to flip a switch, turning on the massive Wonder Bread neon sign that has stood dark for more than four years on N. 4th Street.

The light signifies the revitalization of a Columbus landmark, which closed in May 2009 after more than a century turning out bread.

Lykens, owner of Lykens Cos., has spent the past year and about $6 million converting the bakery into the Wonder Bread Lofts.

The 66 apartments carved out of the 70,000-square-foot building offer 48 layouts to fit the jumbled old factory, which Lykens estimates has been expanded eight or 10 times from the original structure built in the first decade of the 20th century.

“It was a pain in the butt to work this out,” said Lykens, adding that all the bakery equipment remained in the building when he launched the project. “The building was kind of a mess.”

The project’s massive excavation unearthed an old street, along with a sinkhole and a 150-year-old brick sewer.

In addition to the walls, ceilings and beams, Lykens retained a few more obvious signs of the building’s history such as a Columbus Bread Co. vault that now serves as a closet in one unit, and the 12-by-3-by-4-foot rolling dough troughs that he intends to turn into planters.

The most dramatic: two first-floor courtyards created by removing two sections of the roof. The courtyard apartments open onto the common space, which Lykens plans to furnish with tables and chairs.

Where possible, though, Lykens kept the building intact.

“I didn’t want this to look like something brand new,” he said.

He installed garage doors in the three units opening onto the former loading dock, for example, allowing the apartments to open entirely onto a shared patio.

Lykens opened the first phase, with 20 second-floor units, in August. He hopes to open the second phase of 20 units this week and the final 26 apartments in October.

The first Wonder Bread tenants, Zack and Emily Rodriguez, moved from a nearby apartment, drawn by the urban design of the complex.

“We always wanted a loft-style apartment,” Zack Rodriguez said. “We really like the high ceilings and the giant windows.”

Rent ranges from $950 a month for studios and one-bedrooms with about 600 square feet to $2,500 for a two-floor, 1,800-square-foot two-bedroom apartment with a curved brick wall and a private patio.

Until a few years ago, prospective tenants might have considered the location, on the eastern edge of the Italian Village neighborhood, too removed from the hubbub of the Short North. But the Rodriguezes said it’s a short walk to High Street, and they are enjoying a few new nightspots on N. 4th Street such as Seventh Son Brewing Co. and Little Rock Bar.

To expand the night-life options, Lykens recently bought the nearby Sunset Lounge and said he is close to getting a restaurant into the Wonder Bread building.

Despite the forest of new apartments rising in the Downtown and Short North areas, Lykens isn’t worried about finding tenants. His experience in managing about 450 rentals in the Short North area convinces him that demand remains strong.

“I’m not too concerned about a growth in units now,” he said. “Eventually, you’ll see demand taper off, I’m sure, but now we lease them as soon as they open.”